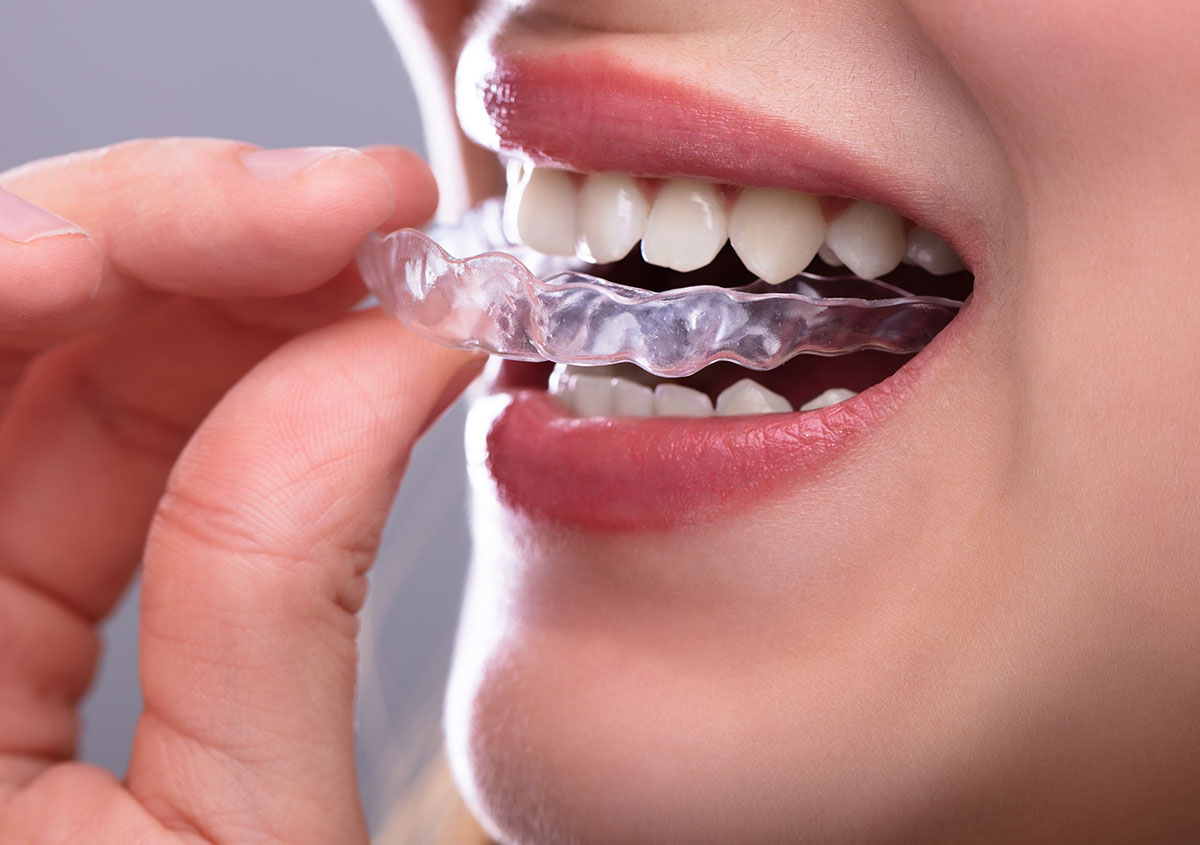 If your teeth aren’t straight, there are several different treatment methods. But in recent years, cosmetic dentistry has settled on two main options: Invisalign aligners, and traditional metal bracket braces.

On the one hand, this is good news, since it gives you a couple of different options. On the other hand, it can make it hard to make a decision. Both have their own benefits, but which one is right for you? To help you sort things out, let’s take a look at the differences between Invisalign and traditional braces.

The most obvious benefit of Invisalign is what you see in their TV commercials: there are no wires. This sets them apart from traditional braces. With a traditional brace, you’re having a set of wires and brackets installed in your mouth. Even if you buy them in fun, attractive colors, everyone will notice you’re wearing braces.

For pre-teens or teenagers, this is no big deal. Millions of young people wear braces, and it’s not unusual. Besides which, they’re generally removed after a few years. On the other hand, if you’re an adult, they can cause a problem. Nobody wants their coworkers to think they’re a sixteen-year-old intern. With Invisalign trays, no-one will even know you’re wearing them.

You Can Remove Them at Will

Traditional braces are a semi-permanent installation. Removing them from your mouth requires hours of work from a trained orthodontist. On the other hand, you can remove Invisalign trays easily any time you want to.

The main benefit here is that braces and aligners can interfere with oral hygiene. Even if you do your best possible job while wearing braces, you’re liable to have bad breath. But with Invisalign aligners, you can access your teeth whenever you want to.

Keep in mind, though, that removing your Invisalign trays too often can make them less effective. You should only remove them when necessary for brushing and flossing your teeth, and replace them when you’re done.

With traditional braces, you have to be careful about what you eat. For one thing, some foods can get caught in the wires, so there’s a long list of chewy and sticky foods that you’re not able to eat. Similarly, other foods can actually cause damage to the braces, so many hard foods are also off the menu.

Conversely, Invisalign trays allow you to eat whatever you want. Take them out, and eat just as you normally would. Then brush your teeth, put the trays back in, and go about your day.

Let’s be honest: any time there’s a device in your mouth bending your teeth back into place, there’s going to be some amount of discomfort. This is more or less unavoidable. That said, Invisalign trays apply a gentler pressure, which is a bit more comfortable. On the other hand, traditional braces need to be tightened from time to time, which can cause weeks of discomfort. In the worst case, the tightening procedure can even cut your gums. Ouch!

Invisalign trays are best-suited for making minor adjustments. Because they slip on and off, they’re not capable of providing the large amount of force required to make more extreme adjustments.

This is particularly true for bicuspids, also known as premolars. Premolars have a rounded shape, which makes it tough for Invisalign trays to get a secure grip. Traditional braces can be used to adjust any tooth, even if it’s very badly misaligned. Because they’re securely attached, they won’t slip or lose their grip.

You Can’t “Forget” to Wear Them

One issue with Invisalign trays is that it’s easy to forget to wear them. For instance, you can take them off to clean your teeth, then forget to put them back on. This isn’t a big deal if it happens every now and then. But interrupting the process on a frequent basis can set you back by weeks. This can get even more problematic if it happens several times with a single set of trays. Because your trays need to be updated regularly, if you get far behind, it can require a new diagnosis to figure out where you’re actually at.

For most adults, this isn’t a significant issue. However, for pre-teens or teenagers, it can be a serious issue. They may find the Invisalign trays uncomfortable, or simply prefer not to wear them. Not only is this going to waste your hard-earned money, it also means their treatment will take longer.

They Work on the Bottom of the Teeth

Because Invisalign trays slip over your teeth from the top, they work primarily on the top of your tooth. This means that treatments can take longer, and also can’t be as extreme. Traditional metal braces, on the other hand, work on the entire tooth, from top to bottom.

If you think braces are a relatively new invention, you’re mistaken. In fact, they’ve been in use since the early 1700s. They didn’t look the same as modern braces, but they worked on the same principle, with a combination of wires and brackets.

Even today, traditional braces are usually the first choice of orthodontists for most dental treatments. They might not be the most comfortable option, but they work. And with decades of experience, orthodontists have a long track record of using them successfully.

Undoubtedly, both Invisalign aligners and traditional braces have a lot of factors going in their favor. However, there are a few factors that can help you decide which one is right for you.

If you’re still not sure, a dentist or orthodontist can help you make the right choice. Contact us to set an appointment, and get started on your journey to straighter teeth and a cleaner smile.

Back to Blog Page

We look forward to chatting with you.

OR SEND US A MESSAGE

Our office is conveniently located.